Tonight, I thought I would introduce all of you to my cat! He’s my fur baby.

Soleil is eight years old, born on a Wisconsin farm in September, 2008. My mom’s co-worker’s sister’s barn cat had a litter of three kittens, Soleil and his brother and sister. Soleil was originally called Solomon, and while I didn’t want to keep his original name, I wanted to keep the “So”. His bi-color coat was much lighter when he was a kitten, blonde and white, so I named him “Soleil,” which is French for “sun.” I brought him home in late November, when he was nine weeks old. He was 2 pounds, 5 ounces of curious, cuddly little fluff.

At 16 pounds, he’s graduated to “fat cat” I have a hard time remembering him as the runt of the litter. 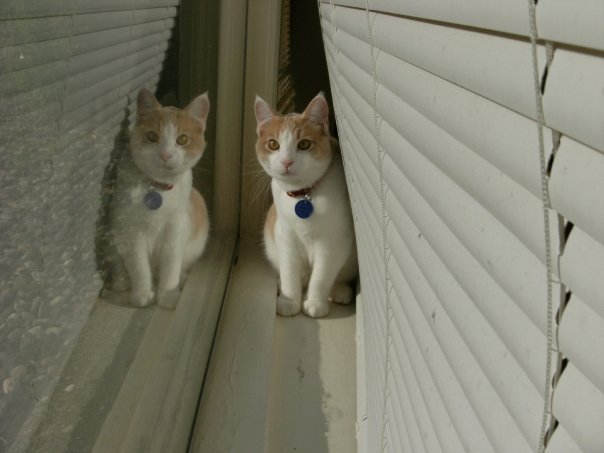 Soleil is the master of the catnap. His favorite places to sleep are my bed, the couch, and his chair. He can also be found snoozing on the windowsill or on the shoe mat. He likes to give his favorite humans nose kisses.

He loves food. All food. He’ll steal anything he finds. I have to put any food on top of the bookcase if I need to step out momentarily. He eats his kibble so fast that I have to split it in half and serve it to him five minutes apart or he’ll throw up. He loves turkey, but it makes him throw up, so all turkey must be carefully monitored. He licks the spoon I use to serve him wet food. Then he goes into the recycling and licks the can clean. He also likes to chew shoelaces and charger cords. He ate another one this morning. I forgot that it was still out when I went to the bathroom and three minutes is all it takes.

He drinks from a water fountain, but he’ll also drink from the toilet. I’ve remarked that he’s part dog and part pig. His eyes were green as a kitten, but now they’re yellow. They glow in the dark. He likes to go to sleep all wrapped up in a perfect circle, but once he’s dreaming he’ll splay all his limbs in different directions. He has absolutely no modesty. He’ll let it all hang out and lick himself in front of guests too!

He has a favorite toy, his stuffed monkey named Momo. He loves to wrestle him. He also loves cat dancers, crinkle balls, boxes, bags, and anything that makes noise. Or moves.

Soleil is king of this apartment and we both know it!

View all posts by eewritersenterprise

This is a text widget, which allows you to add text or HTML to your sidebar. You can use them to display text, links, images, HTML, or a combination of these. Edit them in the Widget section of the Customizer.
%d bloggers like this: